The latest study by Infras highlights the significant economic importance of Zurich Airport, which generates CHF 7 billion in added value and creates jobs for 27,400 employees at over 300 companies.

Every five years, Flughafen Zürich AG has its key economic figures surveyed by an external company. The latest study was carried out by the independent research and consultancy company Infras for the reference year 2021. The calculations were based on two scenarios: the value created without COVID-19 (on the basis of growth in 2017-2019) and the actual loss due to the pandemic compared to the last survey five years ago. The Circle, which was opened in 2020, was included in the survey for the first time. 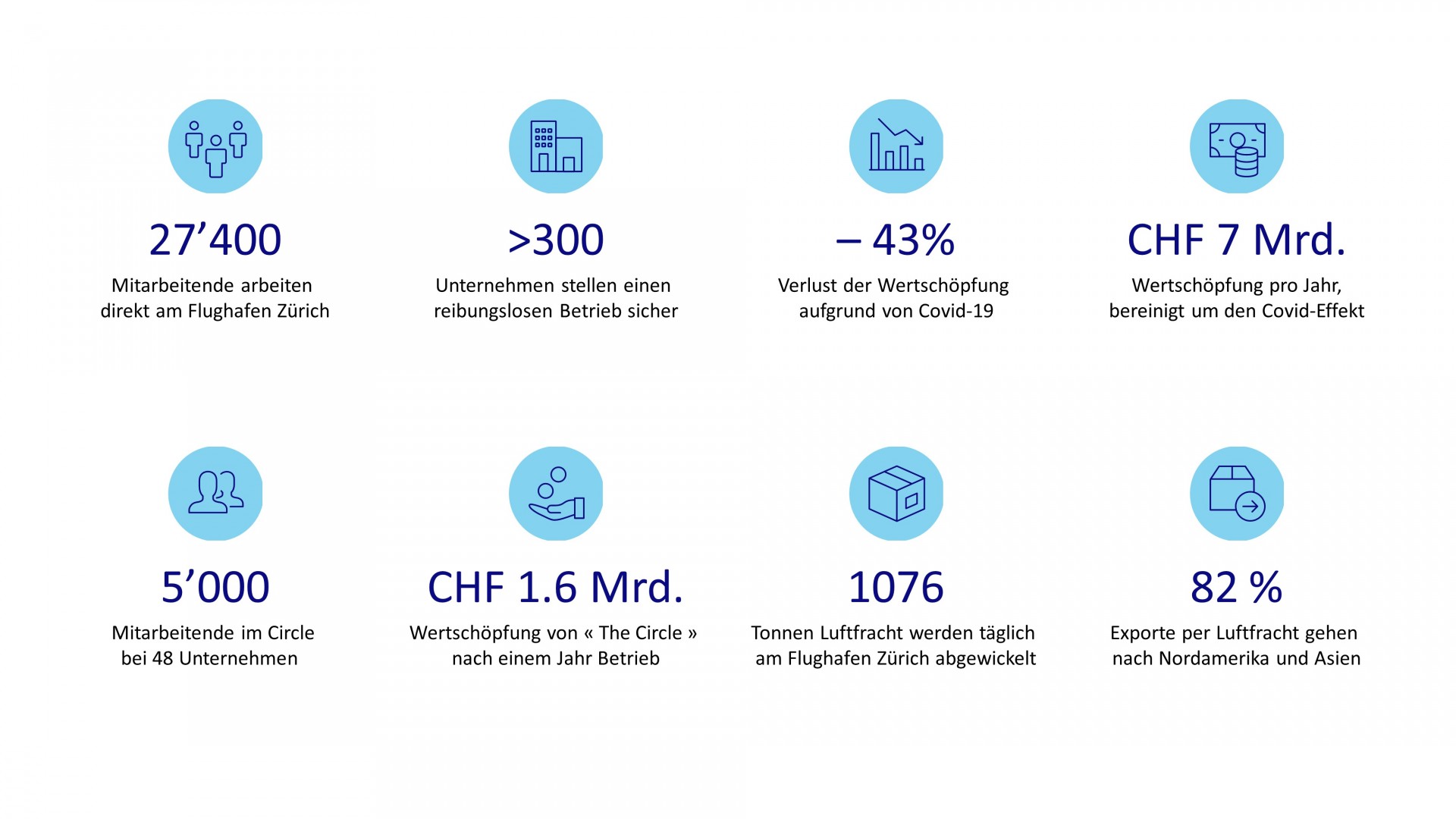 The companies located at Zurich Airport would have generated 7 billion francs a year without the COVID-19 pandemic. This is equivalent to 4.4% of the GDP of the canton of Zurich or just under 1% of national GDP. Compared with the last survey in 2016, this equates to a growth rate of almost 40%, mainly due to the opening of The Circle.

The aviation industry and Zurich Airport were severely affected by the coronavirus pandemic, however. In 2021 the number of full-time equivalents (FTEs) at Zurich Airport fell by 14% compared to 2016, leading to a 43% loss of productivity. This was partly offset by the opening of the Circle: the total value generated fell by 16%, while FTEs increased by 4% altogether to 22,800.

The Circle: 1.6 billion generated in the first year

Since The Circle opened, around 85% of the space has been let to 48 companies employing over 5,000 people. The study showed that The Circle generated 1.6 billion francs in its first full year.

The importance of air freight

Accounting for 40% of exports in terms of value (CHF 130 billion per year), air freight remains extremely important for the Swiss economy. Zurich Airport handles an average of 1,076 tons of freight each day, including transit goods. This highlights the importance of a dense network of long-haul routes for the Swiss economy. 99% of the freight at Zurich Airport is transported in the holds of passenger aircraft, of which 82% is destined for America and Asia.

In order to calculate economic value generation in the narrower sense, the direct effects of companies and the indirect effects (products and services bought in) are combined. The study shows the importance of Zurich Airport as a workplace and Switzerland’s gateway to the world for the surrounding region, Canton Zurich and the whole of the country. The airport’s core mission to offer as many direct flights to the major cities of the world as possible ensures Switzerland’s connection to global markets and thus the prosperity of the country and the airport region.

A summary of the study is available on our Homepage.