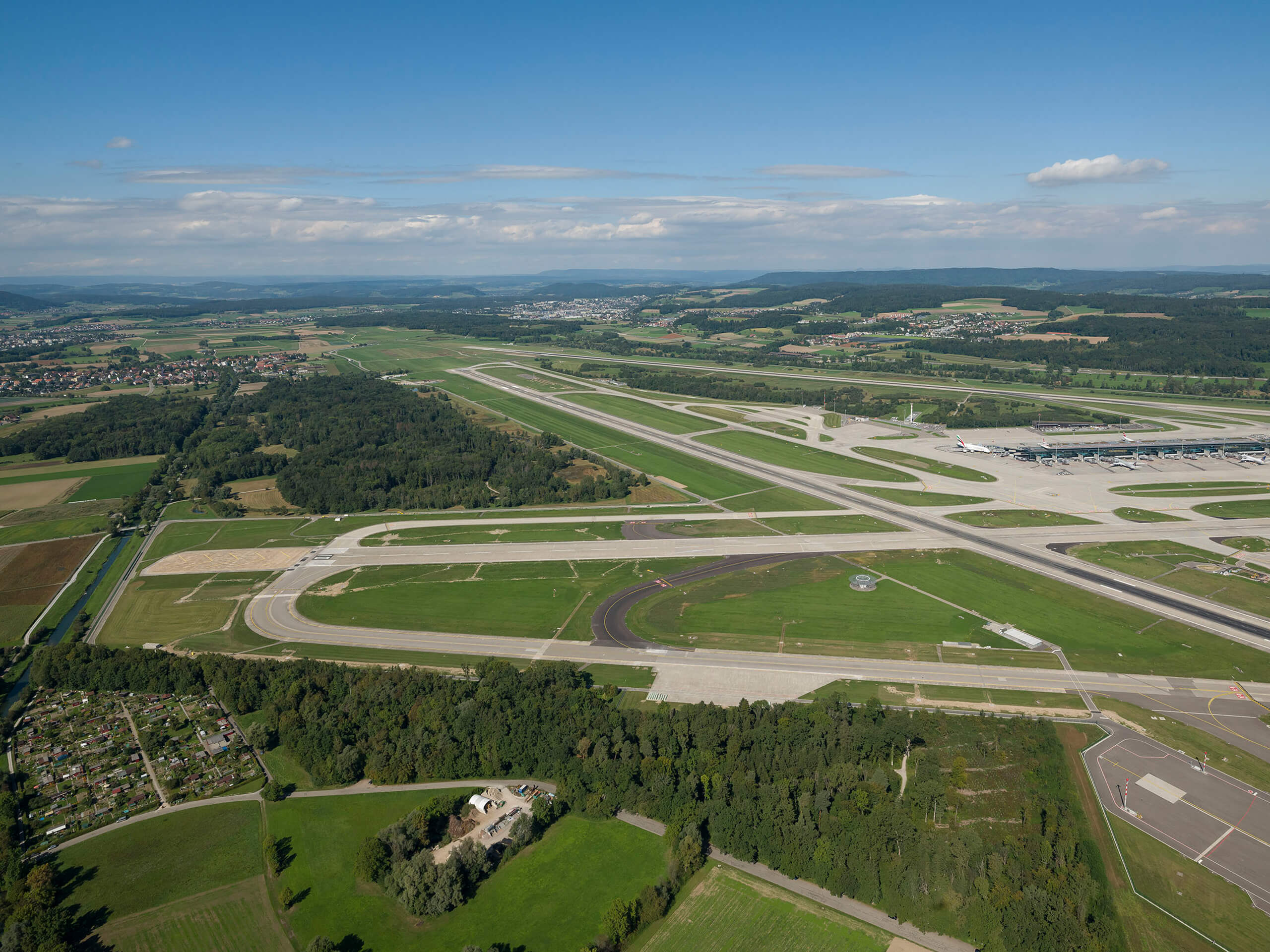 Extensions to runways 28 and 32 –for stable and safe operations

The extensions should improve the safety margin and enable robust operating concepts.

The planned extensions to runways 28 and 32 will enable more stable operations in all weather conditions and for all aircraft types, and will help to improve the safety margin at Zurich Airport.

Operations at Zurich Airport have been handled in the same way since 1 January 1976, with the current system of three runways: 16/34 at 3700 metres long, 14/32 at 3300 metres long and 10/28 at 2500 metres long. In its Sectoral Aviation Infrastructure Plan (SAIP), the Federal Council approved the extension of runway 28 to the west and runway 32 to the north to improve safety and operational processes. The runway extensions are an essential measure from the "Zurich Airport safety review" to improve the safety margin in flight operations.

The extensions to runways 28 and 32 are intended to stabilise the east concept and improve the safety margin. The runway extensions are an important measure to ensure safe operations with two equivalent operating concepts and a capacity of a maximum of 70 flight movements per hour. In addition to the general improvement in the safety margin, Flughafen Zürich AG aims to improve stability and therefore punctuality over the course of the day even in the event of strong westerly winds and during the German evening restrictions, when the east concept is used, thus also reducing delays in the evening.

Heavy long-haul aircraft will also be able to land on runway 28 or take off from runway 32 even in more challenging weather conditions (wind, rain) thanks to the runway extensions. By extending runway 28, single approaches to runway 34 in the east concept can be largely eliminated, thus increasing the weather-related availability of the east concept. As such, there will be less need to switch to the south concept.

Aircraft that are handled at Dock E currently have to cross runway 28 and the high-speed taxiways of runway 28 twice each until they reach their take-off point at runway 34. If runway 32 is extended by 280 m, the overwhelming majority of heavy long-haul aircraft will be able to take off towards the north on runway 32 without having to cross any runways. This will also reduce the taxi time from Dock E to the runway by 5 to 10 minutes. As such, more aircraft in the last long-haul wave will be able to take-off before 23:00.

Conclusions: Extending the runways will reduce complexity, improve the safety margin and enhance reliability in the flight operating system. In addition, the problematic crossing points on the ground and in the air during take-offs and landings are largely eliminated. The number of people affected by noise in the evening will also be reduced owing to fewer landings from the south.

Runway 28 is currently 2500 metres long. It is to be extended by 400 metres towards the west, making it 2900 metres. There will again be a 170-metre-long engineered materials arrestor system (EMAS) at the end of the runway.

Runway 32 is currently 3300 metres long. It is to be extended by 280 metres towards the north, making it 3580 metres. The extension of runway 32 will generally enable even heavy long-haul aircraft to take off in the evening, so it will no longer be necessary to switch to runway 34. Heavy long-haul aircraft that are handled at Dock E cannot currently use the shorter runway 32, which is closer, and have to switch to the longer runway 34. However, this means that they have to cross main runway 28 twice: once on their way to runway 34 and again when taking off. There are also two crossing points with the taxiways for runway 28.