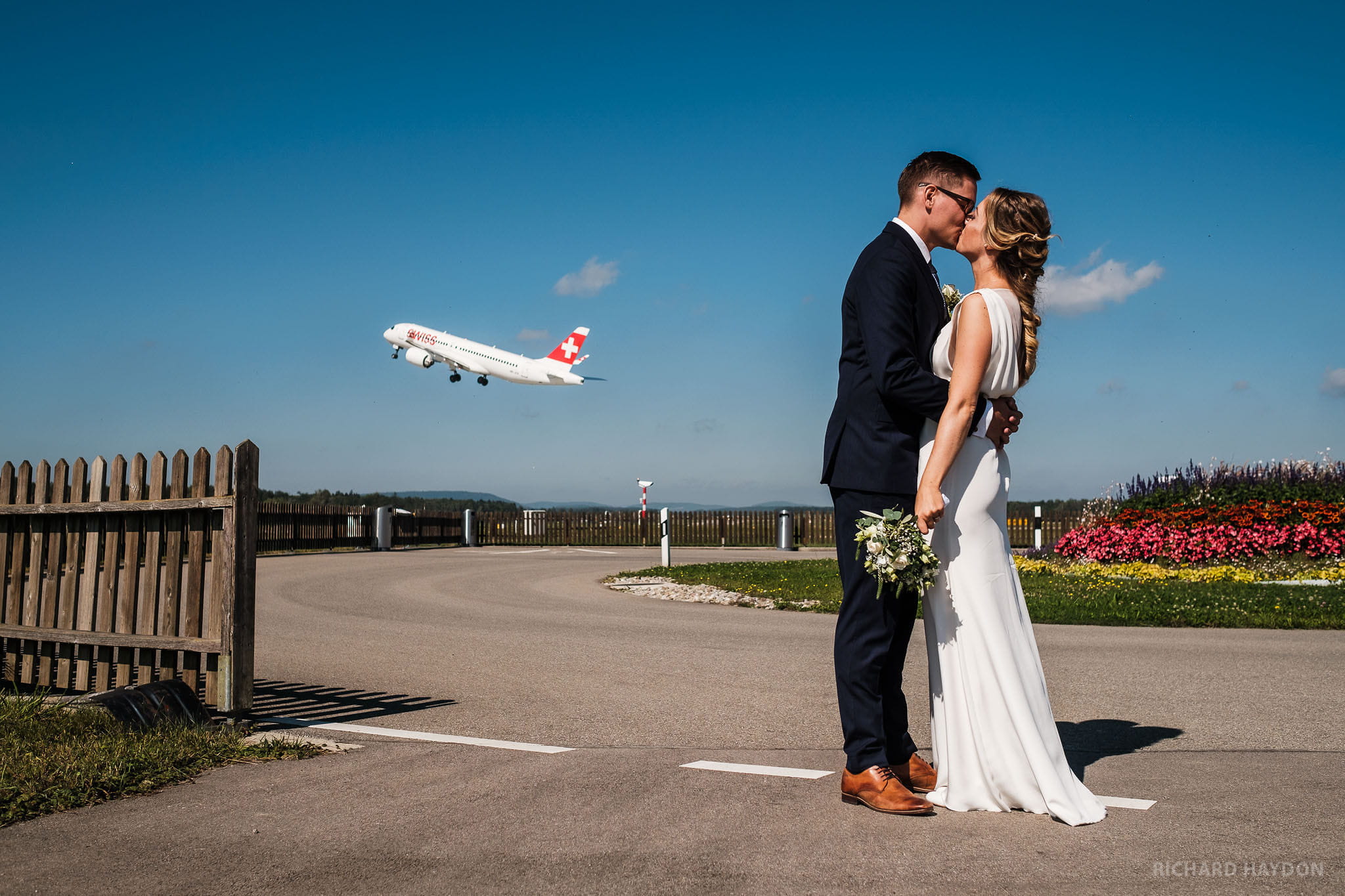 Wedding photography –with a unique backdrop

Magical photographs for your wedding day.

Do you dream of truly memorable wedding photographs? At Zurich Airport, we offer you the opportunity to take these both in the terminal area and on the tarmac. Three or six predefined photopoints (depending on the package you select) create the backdrop for unforgettable pictures. For photography on the tarmac, you will be transported by passenger bus. For other photographs, you will be on foot. 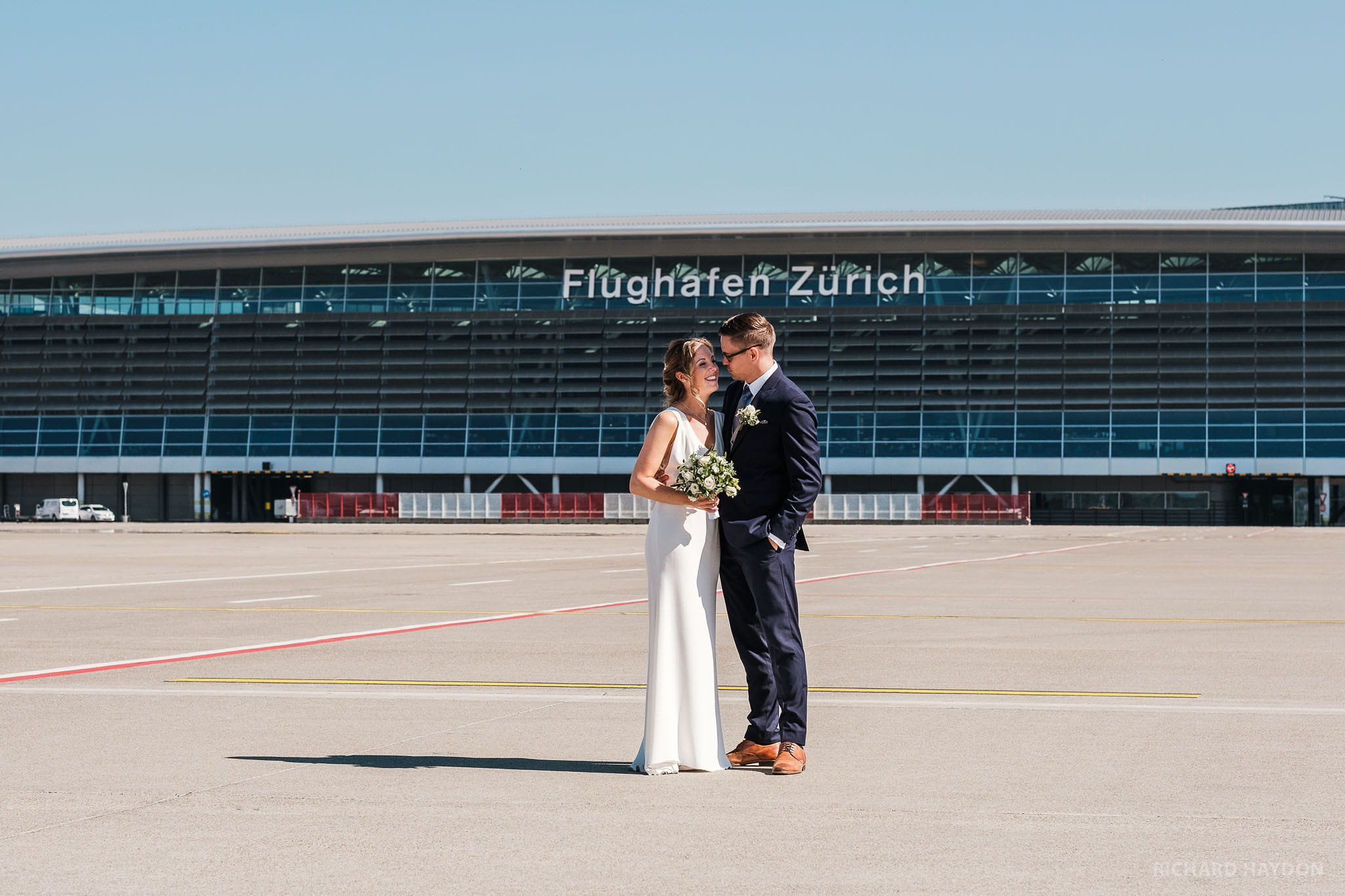 Description of the 6 photo points

At the arrival 2, in front of the information desk, the tour guide will welcome you and your guests. Together, you will pass through the security check and enter the airside area of the airport. The tour guide will then accompany you to the predefined photopoints.

Terminal: Airside Center (in front of the large windows)

The Airside Center is the airport's passenger hub. The architecture was modelled on a wing and the wide view over the tarmac, where aircraft dock or are pushed back, can be enjoyed through the vast windows.

Terminal: empty gate in Terminal A or B/D

At a gate that is not in operation for the handling of a flight, or in the terminal area in general, beautiful photographs are possible. The architecture is different in all three docks - A, B/D and E. While Dock B/D and E feature modern infrastructure, the structure of Dock A has remained largely unchanged since it began operations in 1985. You may choose in which terminal you wish to take the photographs.

Dock E is reached by an underground cable car - the Skymetro. Dock E is reknowned for its architecture, including high ceilings, large windows flooded with daylight and long corridors.

Tarmac: viewpoint at the intersection of the runways (Rundfahrtenplatz / Pistenkreuz)

At the viewpoint located at the intersection of runway 10/28 and runway 16/34, you will have an unforgettable view of aircraft landing and departing and this activity forms a unique background for your photographs.

Tarmac: stand with a SWISS or Edelweiss aircraft

A stand with a SWISS or Edelweiss aircraft not currently in operation is another memorable photopoint. The bus driver and tour guide define the stand on the day itself. Under the supervision of the tour guide and keeping safety instructions in mind, you will have the possibility to move freely around the aircraft. Please note: Photographs of SWISS or Edelweiss aircraft that are recognizable as such on the pictures, may only be used for private purposes. Pictures of other airlines are not possible.

Tarmac: stand with a view to the Airside Center and the large «Flughafen Zürich» sign

Several stands on the tarmac offer a perfect view of the Airside Center. The architecture of the Airside Center was modelled on a wing. The large "Flughafen Zürich" sign is also prominent. To avoid disturbing flight operations, the bus driver and tour guide decide on the day where the photographs will be taken.

Our Visitor Services & Events Team will be happy to help you.